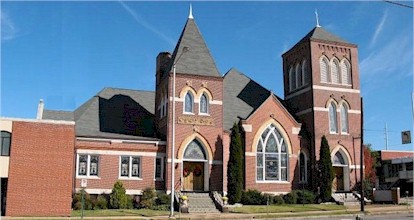 By 1889, Third had grown to over 500 members, commissioning over 50 of its own to begin churches in Woodlawn, Leeds, and South Highlands. That same year, on August 4, the church installed its first permanent pastor, James Alexander Bryan, who had been a visiting pastor at Third while a seminary student at Princeton University. He would later become known to virtually everyone in Birmingham as "Brother Bryan." Bryan would continue to serve the church and the city for 52 years. 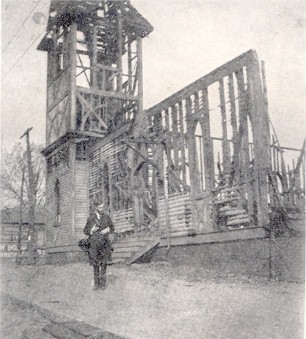 Bryan observes the damage of the 1901 fire.
Also in this period, the congregation undertook the task of constructing a building. The original building, located at 22nd Street South and Avenue F (now 6th Avenue South), cost about $5300 and was dedicated in January 1891, free of debt. The building was enjoyed for a decade, until April 17, 1901, when an apparent spark from a passing street car ignited something in the barn adjacent to Brother Bryan’s house. The fire subsequently spread to the house and church. The building completely destroyed, the congregation would continue meeting in a tent, without missing a service, until a new church building was constructed at the other end of the block on the corner of Avenue G. After Bryan's death in 1941, assistant minister James Cantrell became the full time pastor until his retirement in May 1978. Richard C. Trucks served as pastor from 1978 until 2019. Michael Brock has served as pastor since 2019.

Completed in 1902, the church sanctuary and chapel remain essentially the same today. Only the corner steeple/tower is different, as the original was severely damaged by lightning (circa 1930s). The tower was refitted with a less steep roof line, giving a slightly different appearance than the side tower which still maintains the original sharp-angled roof. In 1934, friends of Brother Bryan donated a large vertical painted sign reading "God is Love" to ornament the church.

Immediately adjacent to the church was Brother Bryan's house, which had become the "Sunday School Annex." In 1959, the house was razed for the construction of a new addition to the church, the "Bryan Educational Building," which was dedicated on December 11, 1960. In 1963, the "God is Love" sign was replaced with an electrically-lit version. In 1972 the corner tower was capped with a large, electric cross.

The sanctuary and chapel (the original structure) underwent a major renovation/restoration from 1993 to 1995. While entailing considerable structural repair, the restoration also gave a facelift to the interior as well as seeing the removal of the sign & cross on the corner tower. The cross was replaced by a smaller metal-cast cross, matching the metal apex piece of the side tower.