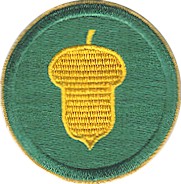 The 87th Training Support Division (also called the Golden Acorn Division) is a United States Army Reserve Division headquartered at 1400 Golden Acorn Drive in Hoover. The 87th plans, conducts and evaluates training exercises for the Army Reserve and National Guard, with a special emphasis on combat support and battle command staff training. The unit also participates in training for military assistance to civilian authorities in the event of natural disasters or other emergencies.

The Division's subordinate units include five brigades, the first of which is also headquartered in Birmingham.

The 87th Division began as the 87th Infantry Division, organized in 1917 at Camp Pike, Arkansas and deployed as part of the American Expeditionary Force during World War I. The 87th provided combat support such as construction, policing, convoy escort and logistics behind the front lines in France. The unit returned home in July 1919 and was deactivated, only to be reconstituted two years later as part of the Organized Reserves.

During World War II the 87th was reactivated at Camp McCain, Mississippi on December 15, 1942. The Division was deployed to England in the fall of 1944 and joined Patton's 3rd Army as it swept across Europe that winter, linking up with Russian forces at the border of Czechoslovakia on May 21, 1945. The Division participated in numerous campaigns, most famously being hailed as the "Liberators of Koblentz". After the war the unit was again deactivated, only to be reconstituted in November 1946 as a Reserve Division with headquarters in Birmingham.

Following the Korean War the 87th Division was given responsibility for conducting training exercises as the 87th Maneuver Area Command (created February 7, 1957). The historic "golden acorn" patch worn by the original 87th Infantry was returned to service as the Division's identifying insignia.

On October 1, 1993 the 87th MAC was deactivated in order to establish a new 87th Division (Exercise) to implement new training methods developed after Operation Desert Shield/Desert Storm. The unit's name was changed to the present "87th Training Support Division" in October 1999. The Division is more closely integrated with active Army and National Guard units and reports to the 1st Continental US Army as well as to the US Army Reserve Command.