The A. G. Gaston Building is a three-story office building located at 1527 5th Avenue North, on the southwest corner of 16th Street, across from the A. G. Gaston Motel in what is now Birmingham's Civil Rights District.

The $1.2 million building was designed by Perry C. Langston for the Bank Building & Equipment Corporation of America of St Louis, Missouri. The sleekly modern design features green and beige enameled steel cladding panels and large expanses of plate glass. A 600-seat L. R. Hall Auditorium is accessed from a side entrance on 16th Street. The rear of the building and the auditorium entrance have walls of beige brick, crowned over the doors with a colorful tile mosaic.

It was completed in 1960 and included central air conditioning and piped-in music, wired intercoms, wall-to-wall carpeting and an elevator. The executive offices were wallpapered with silk, lit fluorescently, and equipped with solid oak furnishings. Mayor Jimmy Morgan cut the ribbon at a February 28 ceremony attended by many of the city's African-American business and civic leaders.

The building was added to the National Register of Historic Places on September 11, 2000. In 2003 the building was renovated by owner Richard Walker, preserving its original design. The renovations, designed by Bob Moody and carried out by Charles & Vinzant, won a 2003 Preservation Award from the Birmingham Historical Society. 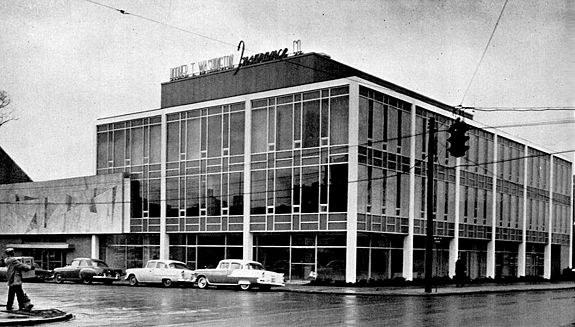