From Bhamwiki
(Redirected from A. M. Brown)
Jump to: navigation, search 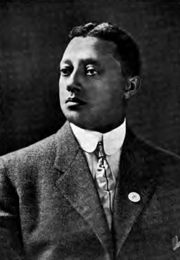 Arthur McKinnon (or McKimmon) Brown (born November 9, 1867 in Raleigh, North Carolina; died December 4, 1939 in Birmingham) was a physician and former president of the National Medical Association.

Brown was the second of seven children born to Winfield Scott and Jane Curtis Brown of North Carolina. He attended public schools in Raleigh, except for two years at the private Shaw University, and earned a scholarship to Lincoln University in Pennsylvania. He was a popular vocalist for the Silver Leaf Glee Club, and completed his undergraduate degree in 1888 and completed medical school at the University of Michigan in 1891, with a special qualification in surgery.

Spurred by the reputation that Alabama's medical certification examination was especially difficult, Brown came to the state determined to meet the challenge. He more than measured up, earning a record-high 98.25% score. He opened his first medical practice in Bessemer, but was forced to relocate to Cleveland, Ohio, where his family had moved, during the 1893 financial panic. He returned to Alabama in 1894, this time settling in Birmingham and taking up the practice of the retiring Norman Hudson. He married Mamie Lou Coleman in 1895.

Brown raised a volunteer company during the Spanish-American War, but the unit was never activated for duty. He wrote to the Surgeon General of the United States to volunteer his services as a surgeon and was given a contract to serve in Cuba during the war. He was eventually assigned to command the all-African American 10th Cavalry from August to October 1898. In January 1899 he was sent to Fort McIntosh, Texas. A month later he was shot during a "personal encounter" with a white steward. His contract with the army was cancelled during his recovery and he returned to Birmingham in April. In 1902 he and Mamie moved to Chicago, Illinois, but they returned South in 1904 when she fell ill. She died later that year.

Brown married his second wife, Nellie, on September 27, 1905. The couple were active members at 16th Street Baptist Church and had four children. He and other black physicians, such as Logwood Goin and Ulysses Mason, kept offices in the Pythian Temple building at 310 18th Street North.

Brown was one of the founders of the Children's Home Hospital, where he practiced alongside other black physicians, and also founded the People’s Drug Company.

Brown joined with Mason and other leaders to lobby for rebuilding the Thomas School, which had been damaged by fire in the 1890s. A new school building was eventually completed in 1910. He hired the school's architect, Wallace Rayfield, to design his own large house at 319 4th Terrace North in Smithfield in 1909.

Brown served as president of the National Medical Association in 1914 and also chaired the Alabama Prison Improvement Board. He died in December 1939 following a long illness and is buried at Oak Hill Cemetery.