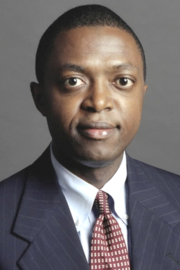 Abdul K. Kallon (born 1969 in Sierra Leone) was a federal judge in the United States District Court for the Northern District of Alabama from 2009 to 2022.

Kallon was raised in Sierra Leone by a single mother. A supervisor at the bank where she worked hired her to accompany him to the United States as his secretary when he was appointed ambassador. While in Washington she earned degrees in finance, then sent for her children in 1980.

Kallon was valedictorian at Bladensburg High School in Maryland. He earned a degree in history at Dartmouth College in 1990 and completed his law degree in 1993 at the University of Pennsylvania Law School. He came to Birmingham to clerk for Clemon and began working at Bradley Arant in 1994. During his career, Kallon has specialized in employment law, handling discrimination, harassment, and wrongful termination cases. He was recommended to Clemon as a clerk by Lani Guinier, a former classmate at Penn. He began working at Bradley Arant Rose & White in 1994 and was eventually named a partner in the firm.

Kallon was appointed by President Obama in 2009 to succeed U. W. Clemon on the District Court and unanimously confirmed in the U.S. Senate. President Obama nominated Kallon to fill a long standing vacancy on the United States Court of Appeals for the 11th District in 2016. Though Senators Richard Shelby and Jeff Sessions had supported his appointment to the District Court, they issued a joint statement opposing his nomination to the Appeals Court. Kallon resigned from the bench in August 2022.

Kallon has also served as president of the Magic City Bar Association and as board president for the Legal Aid Society of Birmingham. He has also served on the boards of Children's Village, Sister Cities of Birmingham, Girls Inc., Big Brothers Big Sisters of Greater Birmingham‎‎, the Alabama Center for Law and Civic Education and the community restoration fund managed by Bethel Baptist Church.