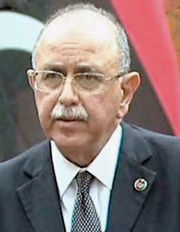 El-Keib studied electrical power engineering at the University of Tripoli and came to the United States in 1975 to continue his studies. He completed graduate work at the University of Southern California in Malibu and North Carolina State University in Raleigh. His research into Emissions Constrained Dispatch and VoltlVar compensation on primary distribution feeders was sponsored by the National Science Foundation, the Electric Power Research Institute, the United States Department of Energy, Southern Company and Alabama Power Company, where he served as an engineering consultant.

El-Keib joined the Alabama faculty as an assistant professor in 1985 and earned a full professorship in 1996. He took a two-year leave of absence beginning in 1999 to teach at the American University of Sharjah in the United Arab Emirates, where he helped establish a Division of Eletrical, Electronics and Computer Engineering. He left Alabama in 2005 and later chaired the Electrical Engineering Department at the Petroleum Institute in Abu Dhabi. He has served on the board of directors of the Arab Science and Technology Foundation, on the science and technology panel of the Islamic Development Bank, as a senior member of the Institute of Electrical and Electronics Engineers, and on the editorial advisory board for several engineering journals.

El-Keib was appointed interim Prime Minister by Libya's National Transitional Council on October 31, 2011. He succeeded revolutionary Mahmoud Jibril, who stepped down after the death of Moammar Gaddafi, and will serve as head of state until democratic elections are held.