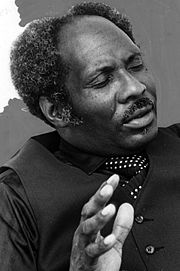 Reverend Abraham Lincoln Woods Jr (born October 7, 1928 in Birmingham; died November 7, 2008 in Birmingham) was an African American minister, history professor, president of the Birmingham Chapter of the Southern Christian Leadership Conference, and a civil rights activist and organizer who continued to preach and to press for human rights well into his retirement.

Woods was one of 11 children born to Maggie Wallace and Abraham Woods Sr of Birmingham. He graduated from Parker High School and earned a scholarship to Morehouse College in Atlanta. He befriended a young Martin Luther King, Jr at Morehouse, but after a year there he became ill and returend to Birmingham. He felt a call to the ministry and earned his bachelor's degree in theology from Birmingham Baptist College. He later earned a bachelor of sociology from Miles College, and a masters in history from the University of Alabama. He completed the necessary credits for a Doctorate in History, as well.

Woods began preaching at age 22 and served for thirteen years at First Metropolitan Baptist Church and then thirty-seven years at St Joseph Baptist Church in West End. He taught history at Miles College for 41 years before retiring in 2002.

Woods was already active in registering black voters when he became a charter member and vice-president of the Alabama Christian Movement for Human Rights in 1956, assisting Fred Shuttlesworth. He helped to organize protests and challenges to Birmingham's segregation laws and was jailed for five days for leading a sit-in at a downtown department store. He was a member of the ACMHR's central committee that worked with King's Southern Christian Leadership Conference to plan the 1963 Birmingham Campaign. He helped organize participation from the Southeast for King's march on Washington in August of that year and stood behind King during his "I Have a Dream" speech.

Woods later led campaigns to register voters at Miles College and to recruit African-American applicants to the Birmingham Police Department. In 1979 he was instrumental in laying the groundwork for Richard Arrington's first mayoral campaign, which followed a much-publicized police brutality case. He helped with Jesse Jackson's 1984 presidential bid and marched with Arrington in 1991 to protest a federal investigation of City Hall. He was a leader in efforts to desegregate the Shoal Creek Golf and Country Club in advance of the 1990 PGA Championship.

In recent years, Woods fought to reopen the investigation into the 1963 church bombing at 16th Street Baptist Church and has been instrumental in establishing the Civil Rights Institute. He was the principal organizer of the annual Martin Luther King Jr Unity Breakfast and Martin Luther King Day celebration and gun buy-back program. He retired from the SCLC in 2006, but remained in the pulpit at St Joseph.

Woods died at Princeton Baptist Medical Center in November 2008 after a long bout with cancer. He was survived by his wife, Marian, seven children, 18 grandchildren and 10 great-grandchildren. Marian followed him in death in June 2009. A funeral service with songs and hymns selected by Woods was held on November 15, followed by burial at Elmwood Cemetery.

Wood was inducted into the Birmingham Gallery of Distinguished Citizens in 1996. After his death the Birmingham City Council approved a proposal by Mayor Larry Langford to rename 8th Avenue North as "Reverend Abraham Woods Jr Boulevard" in his honor.