1971 rendering of the proposed Sheraton Inn

The Sheraton Inn (later Ramada Inn, Amad Inn, Adams Inn, and Central Inn) was a hotel located at 300 10th Street North. It occupied the block between 3rd and 4th Avenue North and between 9th and 10th Streets and is just west of I-65.

Originally a Sheraton Inn, the five-story, 201-room hotel was developed in 1972 as a joint venture of the Jemison Investment Company and the Southern Life and Health Insurance Company. The $2.5 million building was built on the site of the Birmingham Transit Company's former "car barn". The complex included 12,500 square feet of public spaces with banquet facilities for up to 220 people. The architectural design was created by William W. Bond, Jr and Associates of Memphis, Tennessee. The building was constructed by the Daniel Construction Company.

Later rebranded as a Ramada Inn, the hotel went through a succession of owners and vacant periods before Asif Balagam, a salvage dealer from Atlanta, Georgia purchased it. At some point, the sign was altered by removing the fist and last letters of "Ramada", and the hotel operated as the "Amad Inn". Later the sign was changed to "Adams Inn", and the hotel did business as "Adams Inn Central" or "Central Inn". 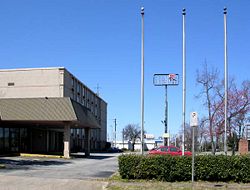 After a long decline, only part of the motel was being used when a fire broke out on the first floor on February 4, 2009. It was quickly contained. The building was vacated for good following a dispute with the property's insurer over storm damages.

The City of Birmingham has ordered the owner to secure the building against squatters and vandals, but Balagam's meager efforts have been ineffective, and the site is littered with broken windows and trash thrown from upper rooms onto the parking lot. In August 2010 the Birmingham City Council began the process of condemning the property, opening the door for demolition.

A major fire destroyed part of the still-vacant building on July 24, 2013. That November, the Birmingham City Council approved a $750,000 proposal from Mayor William Bell's office to demolish the building. Instead of contracting the work, however, the Mayor's office negotiated with Southern Conservative Liquidators of Atlanta to perform the demolition work in exchange for salvage rights. That deal, however, was held up because because the owner's approval was required to confiscate the salvage property.

In February 2014, the hotel, still standing, became the scene of another fatal fire. A 32-year-old male was found dead in the second-floor room where the fire began. Mayor Bell then issued an emergency order for demolition. Work began in early April.