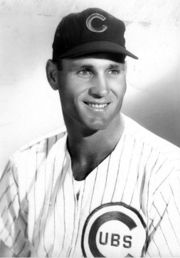 Lary is one of three players who have been named to both the football and baseball All-Century Teams at Alabama. He still holds the Crimson Tide's single-season record for touchdown receptions with 10 and ranks fourth on career touchdown list with 14. He ranks third on career list for average yards per reception for a season, averaging 19.6 per catch and ranks 5th for a career.

Lary signed with the Chicago Cubs as an amateur free agent before the 1951 season, and made his Major League debut on September 25, 1954 in a start against the Cincinnati Redlegs at Wrigley Field. Lary pitched six innings and allowed two earned runs, receiving no decision in the 4-2 Cubs victory.

He was with the Cubs briefly in 1955 and was used in four games, all as a pinch runner. It would be seven years before he reached the Major League level again. Lary gave up Willie Mays' 324th career home run, a grand slam, in Candlestick Park on April 28, 1962.

Lary played 12 seasons in the minor leagues, and retired in 1964. He was the older brother of All-Star pitcher Frank Lary.

Lary was posthumously inducted into the Alabama Sports Hall of Fame on June 3, 2007.