From Bhamwiki
(Redirected from Alabama Power)
Jump to: navigation, search

The Alabama Power Company is an investor-owned public utility, and the second largest division of Southern Company. It generates and distributes electricity to most of the southern two thirds of Alabama. Its headquarters are the Alabama Power Building in downtown Birmingham. The CEO is Mark Crosswhite, who succeeded Charles McCrary in March 2014.

The Alabama Power Company was founded by William Lay on December 4, 1906 in Gadsden. Part of Lay's reason for founding the utility was to spur development of the region. Alabama Power was one of the first electric companies to make economic development a priority of its business.

The company was awarded permission to construct a dam on the Coosa River, but Lay was unable to finance the project. He sold the company to James Mitchell who had spent 17 years constructing an electric system in Brazil. Under Mitchell's leadership the Coosa River Dam was constructed, going into operation in 1914. In 1918, Alabama Power deeded its Muscle Shoals operations to the U. S. government as a gesture of aid in the War effort. The facilities were used as the nucleus of the Tennessee Valley Authority.

In 1920, under new president Tom Martin, Alabama Power's economic development and industrial recruitment activities were formalized as the companies "New Industries Division". In 1922 the company launched WSY, the first broadcast radio station in Alabama. The demand for entertainment led the company to donate the station's equipment to Alabama Polytechnic Institute rather than devote itself to programming. 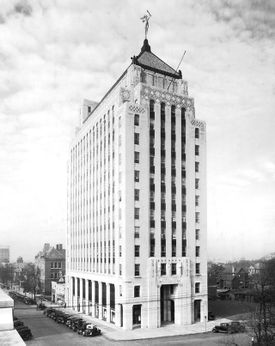 The Alabama Power Building in Birmingham

In 1940 the TVA took over Alabama Power's profitable northern division. In 1941, Martin founded the Southern Research Institute in Birmingham. Early research directed by Martin established the suitability of Southern pine pulp in the manufacture of paper. SRI also develops the basic research for heat-pump technology.

Following in Reddy Killowatt's footsteps, Louie the Lightning Bug is created at Alabama Power and is later used in national electrical safety campaigns.

In the 1990s Alabama Power worked with its parent, Southern Company, in the development of coal gasification and switchgrass fuel; two technologies that show promise in reducing air pollution from coal-fired generation plants. Another technology tested by Alabama Power significantly reduces mercury emissions.

In 1999 the Environmental Protection Agency initiated an enforcement action against the company for violations of the Clean Air Act. That same year, the company opened a service center and showroom for electric vehicles as part of a partnership with the Birmingham Area Chamber of Commerce's "NoZoner" program.

In 2006, Alabama Power announced that it would spend $2 billion upgrading pollution controls at its coal-burning plants as part of a settlement with the agency. Legal claims against five coal-fired plants filed by the Southern Environmental Law Center were unsuccessful, but the SELC plans to appeal the decisions.

The Alabama Power Foundation, established in 1989, funds grants for community and environmental quality-of-life projects, especially along the watershed of rivers which the company uses for hydroelectric generation. The foundation operates the "Renew Our Rivers" program.

From 2004 to 2008 Alabama Power used a pair of talking birds, Mickey and Ben, in commercials and on billboards. The subject of the utility's expenditures on advertising was broached in a meeting with the Alabama Public Service Commission in October 2008. PSC commissioners Jan Cook and Susan Parker told Alabama Power officials that consumers were angry about seeing the utility put money into ad campaigns while asking for rate hikes. The utility currently spends about $9 million per year on advertising.

In 2019 Alabama Power closed 40 of its 86 local offices across the state, citing increasing use of online payments and authorized payment locations in retail stores.