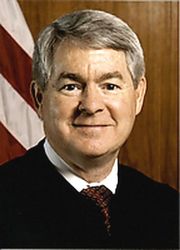 Alan King (born September 27, 1952 in Birmingham) is a three-term Jefferson County Probate Court Judge, presiding in Place 2 and elected in 2006 to Place 1.

King is the son of former state senator Tom King. He holds a Bachelor's degree in finance from the University of Alabama (1974), a law degree from the Cumberland School of Law (1982), and a Master of Arts in public and private management from Birmingham-Southern College (1997).

Before going into law, King worked as an accountant in Saudi Arabia for Vulcan Materials. He joined the firm of King and King in 1982 and then left to work as a sole practitioner in 1991. He was elected to Probate Court, Place 2 in 2000 and was re-elected in 2006 and 2012. He was named Presiding Judge in 2007. In 2017 he announced that he would not seek a fourth term. In 2020 the Alabama State Supreme Court ruled that King had "egregiously" violated the due process rights of Joann Bashinsky in appointing a temporary guardian and conservator to manage her estate.

King and his wife, Karen reside in Vestavia Hills and have one daughter, Kendall. The three of them were struck by a hit-and-run driver on Thanksgiving night in November 2018 while visiting Kendall in Denver, Colorado. Karen was killed, and Alan and Kendall were seriously injured.

King challenged his colleague Mark Gaines, who was appointed to the bench by Governor Bob Riley, for Probate Judge, Place 1 in the 2006 general election. He defeated Gaines by a margin of 54% to 46%.