This article is about the basketball player, for the band, see Alan Ogg (band) 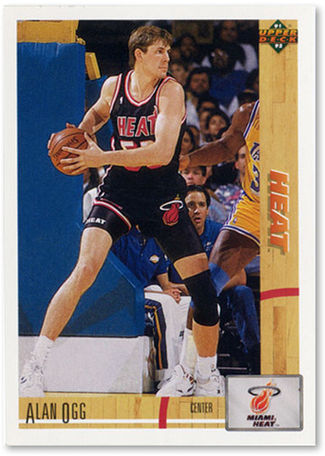 Raymond Alan Ogg (born July 5, 1967 in Lancaster, Ohio; died November 1, 2009 in Birmingham) is a former professional basketball player who starred at Gardendale High School and at UAB from 1986-1990.

Ogg was cut from his high school team as a freshman, but returned to the court as a sophomore with improving skills. In his senior year he averaged 29 points, 14 rebounds and 8 blocks per game and was invited to the 1981 Pittsburgh Post-Gazette Dapper Dan Roundball Classic where he matched up with fellow 7-footers Dwayne Schintzius and Fernando Barcel. He was accompanied to UAB by his high school coach, Jimmy Armstrong.

Ogg was accompanied by Coach Armstrong when he came to UAB. As a Blazer he ranks first all-time as a shot blocker at UAB with 266, more than twice as many as Jerome Mincy, who is second on the list. He holds the same title for the Sun Belt Conference as well. He is also #9 all-time on UAB's rebounding list with 521.

The 7' 2" center started his professional career when signed on August 16, 1990 for $130,000 as an undrafted rookie with the Miami Heat. He suffered periostitis of the left tibia and was placed on the injured list on November 1, then was waived on December 3. He re-signed with Miami the following January and played until being waived again on November 4, 1992. He split his playing time in his third and final NBA season with the Milwaukee Bucks and the Washington Bullets.

Ogg continued his career in Europe and retired from basketball in 2001. He returned to his boyhood home in Mount Olive and took a job with Brasfield & Gorrie. Ogg, who had a longstanding heart condition, died in at UAB Hospital in 2009 at age 42 from complications of a staph infection that had reached his heart. He was survived by his wife, Nita, a stepdaughter, Deelana, and four grandchildren.