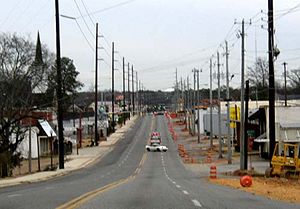 University Boulevard in Alberta City in 2003.

Alberta City (also referred to at times as Alberta, Elberta and Elberta City) is a neighborhood located on the eastern side of Tuscaloosa. The area is generally defined as encompassing the portions of the city east of U.S. Route 82 (McFarland Boulevard), west of Holt, south of the Black Warrior River and north of Veterans Memorial Parkway. The neighborhood is serviced by both Alabama State Route 215 (University Boulevard) and U.S. Route 82 (McFarland Boulevard). 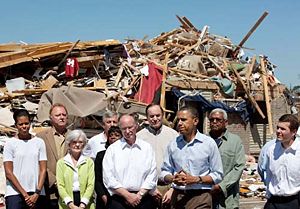 Alberta City traces its roots back to 1908 when J.M. Kicker constructed his home on a 20-acre tract along present-day Kicker Road. Located approximately four miles east of downtown Tuscaloosa, at the time of its founding Alberta City was a heavily wooded area with virtually no development along then called Huntsville Road (now University Boulevard). In its early years, the community was called Holt Junction. In 1914, a prominent landowner, G. B. Wright named the fledgling community Alberta after his wife. Development of Alberta City rapidly occured following the completion of a water line by W. S. Wyman in 1924.

In 1913, Alberta City Methodist Church opened as the first church in the community. In 1916, the Birmingham Highway received its first hard treatment and by the 1930s was completely resurveyed and completely rebuilt as a primary, concrete thoroughfare. Early schools in Alberta included the Valley View, Hopewell and Alberta schools. In 1925 their enrollments were all consolidated into a single Alberta City School. It was during the period between 1925 and its annexation into Tuscaloosa 1948 that Alberta saw rapid growth and development. Major facilities opening in the area during this period included the completion of the Gulf States Paper Mill in 1928, the Tuscaloosa Veterans Hospital in 1930, and the Northington General Hospital in 1943. Over 1,600 individual homes were also constructed during this time.

With continued growth and the need for additional municipal services, the notion of Alberta being annexed by Tuscaloosa was initially evaluated in 1934. That January, a petition with over 100 signatures of Alberta City residents was presented to the Tuscaloosa City Commission. However, it was not until August 1946 that the Tuscaloosa officially agreed to allow for its annexation pending a successful annexation referendum. The initial vote for annexation failed on September 17, 1946 by a final vote of 339 against to 306 for annexation. On September 21, 1948, a second annexation referendum was held. This time the referendum was successful with a final vote of 486 for to 281 against annexation. At that time, Tuscaloosa police, fire, garbage collection and other city ordinances were enacted in the community.

Although primarily a residential suburb of Tuscaloosa at the time of annexation, through the 1950s-1960s, many homes along and in the immediate vicinity of University Boulevard were demolished to make way for commercial development. On October 24, 1957, the Leland Shopping Center opened at the center of Alberta as the first modern shopping center in Tuscaloosa. In 1965 the Pizitz Alberta store opened across the street from Leland. The area continued to grow through the late 1970s when the paper mill ceased operations staring a period of stalled growth in the community. Much of Alberta City suffered extensive damage during the 2011 tornado outbreak.

Today the area children are served by the Alberta Elementary School located along University Boulevard. Public transportation is provided with public bus service by the Tuscaloosa Transit Authority's Holt Route.