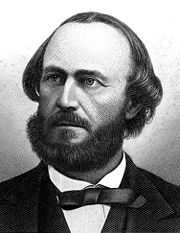 Alburto Martin, sometimes rendered Alberto Martin (born July 9, 1830 in Jefferson County – died November 23, 1879 in Birmingham) was the son of John and Sarah Martin, one of the first families to settle in the county. He graduated from the University of Alabama in the 1850s and opened a law practice in Elyton in 1856. He was elected to represent the county in the Alabama Legislature from 1859 to 1863.

While in office he married the former Harriett Louise Mudd, daughter of William S. Mudd on May 10, 1860. In June 1861 he organized a company of the 10th Alabama Infantry Regiment at Montgomery and was commissioned a captain. His unit was in service to General Wilcox near Manasses during the Civil War. Martin was wounded by a shell at the Second Battle of Bull Run in August 1862, after which he resigned from service and remained crippled for life.

In 1863 he was elected solicitor for the Jefferson County judicial circuit, only to be removed from office by Governor Parsons. He was re-elected by the general assembly of 1865 and held office until 1868. Between 1864 and 1879 the Martins had seven children.

Martin purchased a tract of land in Jefferson County from Martha Clift on May 3, 1870 and subsequently sold to Josiah Morris in August 1871 as part of the parcel of land on which the new city of Birmingham was platted by the Elyton Land Company.

Martin was Jefferson County's delegate to the Convention which created the Alabama Constitution of 1875. He is interred at Oak Hill Cemetery. The Martin School, a former Birmingham City School in Fountain Heights, was named in his honor.