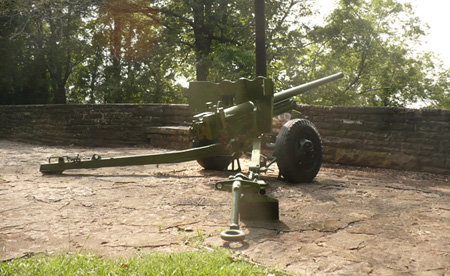 Altamont Park is a narrow, steep 10-acre parcel on the northern slope of Red Mountain below Altamont Road and above 13th Court South / Altamont Alley between Redmont Road and Cliff Road.

The property was purchased by the city in 1921 from the Mountain Terrace Land Company for $64,000, with the purpose of preserving the view into Jones Valley. A group of eleven residents and real estate agents petitioned against the sale saying the price was too dear and the steeply sloping property unsuited for park use. The purchase was financed as 18 annual payments at 6 percent interest. The concept of preserving views from a "Red Mountain Parkway" by means of dedicated linear parkland was endorsed in the Olmsted Brothers' report published in 1925 as "A Park System for Birmingham".

After paying $3,200 toward the purchase, the city let the contract lapse. It was renewed by mutual agreement of the city and land company, on the same terms, in July 1927. On August 5, 1941 the City Commission approved a deal negotiated by Mayor Cooper Green to make final payment of $22,720 to retire the debt four years early, saving $6,720 in future interest payments.

In 1931 four captured guns, previously presented to the city as war trophies through the efforts of the American Legion, were relocated to the side of Altamont Road from Woodrow Wilson Park. The assortment included two German howitzers and a naval gun taken in World War I and an 8-foot naval gun captured in Panama during the Spanish American War. The steep hillside below the road, pejoratively dubbed "Billy Goat Park" by opponent J. B. Aird, was carefully enhanced by culling under the direction of Park Board superintendent Roy Marshall and city forester Hugh Sloss. In 1933–1934 the park was pruned, grubbed and cleared of underbrush by laborers for the Civil Works Administration.

In February 1935 a committee made up of members of the American Legion and the Birmingham Parks & Recreation Board agreed to remove "several of the cannons" from Altamont Park to McLendon Park, the home of Legion Field. That relocation was not accomplished before January 1942, when City Commissioner Jimmy Morgan and Parks superintendent Marshall met to take up the suggestion that the four guns be melted down for scrap and "shot back at the Axis," in response to a nationwide request from U.S. Conference of Mayors president Fiorello La Guardia. Mayor Cooper Green agreed to turn the armaments over to the U.S. Army in August, with assurances that "other guns" would be distributed to the city at the end of the war.

The terraces and walks at Altamont Park, along with the walks in Rhodes Park, were completed by a "flagstone crew" employed by the Works Progress Administration in December 1939. The wide terrace where the remaining gun is displayed connects to a set of stairs, perhaps one of the stairways built in the 1910s to connect Mountain Terrace to Altamont Road, which extends downward from the park to Overlook Alley.

Despite the terms of the 1921 agreement between the city and the land company, Altamont Park was not formally dedicated to the public until decades later. A developer's 1990 proposal to purchase the park and build houses there led to a public outcry. Hundreds of residents appeared at a hearing, which resulted in the city's decision to reject the offer. The realization that only a handful of the city's parks had been dedicated prompted the park board to undertake a master planning process which then furnished the information needed for the city to record the dedications of most of Birmingham's parks in 2000.

Long a light gray in color, the gun was surreptitiously decorated with pink spray paint in 2009. City workers re-painted it in an olive drab color soon later. In 2019 the Birmingham Sunrise Rotary Club began a campaign to restore Altamont Park. They have worked with local Boy Scout troops to clear invasive plants and with Macknally Land Design to develop a restoration plan.