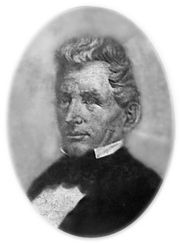 Andrew Barry Moore (born March 7, 1807 in Spartanburg District, South Carolina; died April 5, 1873 in Marion, Perry County) was the 16th Governor of Alabama from 1857 to 1861. He was serving as Governor when the State seceded from the United States and embarked in fighting the Civil War.

Moore was the son of Jane and Charles Moore, a cotton planter and veteran of the American Revolution and the War of 1812. Moore's father purchased land in Perry County in 1823 and moved his family there, although the younger Moore remained in school in South Carolina before joining his family in 1826. After teaching school at Marion, in Perry County, for two years, Moore read law and was admitted to the bar in 1833. For eight years he served as Justice of the Peace for Perry County. In 1837 he married Mary Ann Goree, the daughter of a local planter.

In 1839 Moore was elected to the Alabama House of Representatives as a Democrat. He was defeated by a Whig challenger in 1840, but was returned to office in 1842, and served four consecutive terms. Elected Speaker of the House in 1843, 1844, and 1845, Moore worked closely with Governor Benjamin Fitzpatrick in the liquidation of the Alabama State Bank. He advocated the relocation of the state capitol to Montgomery and delivered the last speech in the old Hall of the House of Representatives in Tuscaloosa.

Moore resumed his law practice in 1846. He was a presidential elector for Democratic candidate Lewis Cass in 1848. Appointed by Governor Henry Collier in 1851 to fill a vacancy on the circuit bench, Moore served in that capacity until 1857 when he accepted the Democratic Party's nomination for governor. He was elected without opposition.

Education and internal improvements received significant attention during Moore's first term. Construction was completed on the Alabama Insane Hospital at Tuscaloosa and Peter Bryce was appointed its first superintendent. The Alabama Institute for the Deaf and Blind was established at Talladega. The Medical College of Alabama, a branch of the University of Alabama, was first established at Mobile. Moore advocated state aid supplemented by Federal land grants to promote railroad construction, and he particularly favored efforts of the South and North Railroad to open the mineral-rich Birmingham District to industrial developments.

Considered a moderate on the slavery issue, Moore defeated the extremist William Sandford in the gubernatorial election of 1859. Although he became more concerned with the defense of states rights after John Brown's raid on the U.S. Arsenal at Harper's Ferry, Virginia, in October 1859, Moore continued to recommend caution. The Alabama Legislature, nevertheless, enacted a law to provide for the military organization of the state in February 1860. The law established a Military Commission composed of the Governor, an Adjutant and Inspector General, and a Quartermaster General, as well as a state army of eight thousand volunteers. The Legislature also approved a resolution requiring the Governor, in the event of a "black Republican" being elected president, to call for the election of delegates to a state convention "to consider, determine, and do whatever necessary to protect the interests of the state." On December 24, 1860, Moore issued writs of election which led to the Secession Convention of 1861.

Between the November 1860 election of Abraham Lincoln and the meeting of the Alabama Convention on January 7, 1861, Moore took several decisive steps to safeguard the state's financial status and defensive capabilities. He urged banks to suspend specie payments and to exchange large amounts of capital for state bonds. He ordered the state militia to seize the arsenal at Mt Vernon and Forts Morgan and Gaines on Mobile Bay, and he contributed more than five hundred troops to assist Florida Governor Madison S. Perry in capturing the Federal forts at Pensacola.

When the government of the Confederate States of America was organized in Montgomery in February 1861, Moore used his influence to help secure the election of the conservative Jefferson Davis over the more radical William Lowndes Yancey.

After he left office on December 2, 1861, Moore was appointed special aide-de-camp by his successor, John Gill Shorter, and he worked to coordinate the procurement and transportation of supplies to General Albert Sidney Johnston in northern Alabama. Following the surrender of Robert E. Lee at Appomattox, Moore was arrested by Federal troops and imprisoned at Fort Pulaski in Savannah, Georgia with other Confederate leaders. Released in August 1865, he returned to Marion and resumed his law practice. He died in 1873.