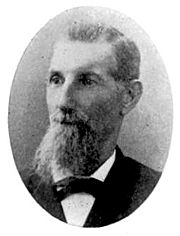 Tarrant was the oldest son of Benjamin and Morning Richardson Tarrant of South Carolina who had moved to Jefferson County near Bethlehem Church below Elyton in 1819.

In 1860 Tarrant married Martha Ayres, the daughter of John Ayres, another Carolinian settler. They had two children, Mattie J. and George B.

At the start of the Civil War he entered the Confederate Army as First Sergeant of Company C of the 20th Alabama Volunteers and fought in the Battles of Port Gibson, Baker's Creek and Vicksburg, where he was wounded and captured. After an exchange of prisoners, Tarrant rejoined his command and fought at Lookout Mountain and Missionary Ridge before joining General John Bell Hood's Tennessee Campaign which engaged Union troops in Franklin, Columbia and Nashville. From there he proceeded to Tupelo, Mississippi and finally to North Carolina. He was detached and sent home after the Battle of Bentonville and returned to farming.