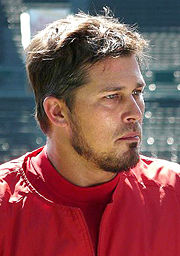 Phillips was raised in Demopolis (Marengo County) and played baseball for the Demopolis Academy Generals (now West Alabama Preparatory Academy). He was drafted as a shortstop by the Milwaukee Brewers in the 41st round of the 1995 MLB Draft, but declined to sign out of high school. Instead he accepted a scholarship from the University of Alabama and played on three Crimson Tide teams that reached the College World Series. For his college career he batted .356 with 322 hits (a team record). As a senior he batted .398 with 22 home runs, 22 doubles, and 66 runs batted in, and was named a first team All-American by the National Collegiate Baseball Writers Association (NCBWA) and Collegiate Baseball Insider. He graduated in 1999 with a bachelor's degree in sports fitness management.

Phillips was picked in the 7th round of the 1999 MLB Draft by the New York Yankees. By 2004 he had reached the AAA International League Columbus Clippers. That season he led all Yankees prospects in batting average (.321) and runs batted in (101) and was second in home runs with 30. He received the Yankees' "Levin Lawn Minor-League Player of the Year" award and was voted Most Valuable Player of the International League's All-Star Game for his 10th inning walk-off home run.

He was called up to the Majors for a September 14, 2004 debut against the Boston Red Sox at Fenway Park. In his first Major League at bat he sent a Terry Adams fastball sailing over the Green Monster for a home run, becoming the 21st MLB player to go the distance on his first pitch. The next spring he received the James P. Dawson Award as the Yankees' most outstanding rookie during spring training.

Phillips continued to shuttle between the majors and minors over the next few seasons, primarily backing up Jason Giambi at first base for the Yankees. When Bernie Williams moved from designated hitter to right field, Giambi was made a DH and Phillips became the starter at 1st. He began the 2006 season with a team-leading .333 batting average going into July, but struggled after that. The Yankees traded for Pittsburgh infielder Craig Wilson, but kept Phillips active as a back-up and utility infielder.

Phillips' mother, Linda, was badly injured in a car crash in 2007, causing him to miss most of that year's spring training. He played in 15 games that season, going .192 in 26 at bats. Rookie Josh Phelps was awarded his spot on the roster. He came back in for Phelps that June and filled in when Giambi and Doug Mientkiewicz were injured. Back in the role of primary first baseman, Phillips again had a strong start, batting .320 in July and .273 in August. He was struck on the wrist by a pitch on September 2 and required surgery to set the fracture, ending his season. Jose Molina took his roster spot and Phillips cleared waivers in December to become a free agent.

In January 2008 Phillips signed with the Cincinnati Reds and started the year with the AAA Louisville Bats. He was brought onto the Reds' active roster on May 28, but designated for assignment the following month when Jeff Keppinger came off the disabled list. He was subsequently claimed by the New York Mets, but stayed only a few days before being reclaimed by the Reds off waivers on July 3.

In 2009 he was invited to the Pittsburgh Pirates' spring camp and performed well, but was sidelined by a back injury before opening day. He was assigned to the AAA Indianapolis Indians and appeared in 7 games before he was traded to the Chicago White Sox for pitcher Michael Dubee on April 17. He was assigned to the AAA Charlotte Knights before winning free agency again in June. On June 23 he signed with the Hiroshima Toyo Carp of the Japanese League. In 2010 he played for the Tohoku Rakuten Golden Eagles.

Phillips wife, Bethany, is a contemporary Christian music artist. They have one daughter, Isaiah.