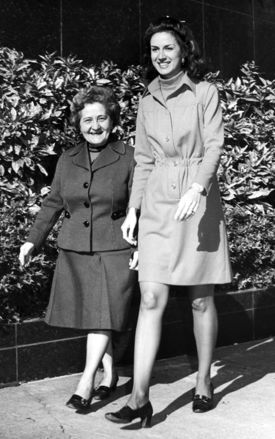 Angelina, usually called "Angi", was the daughter of Judge Hobart Grooms. She graduated from Ramsay High School in 1952, then attended Howard College and Auburn University. She was crowned Miss Alabama in July 1966, performing a folk song for the talent competition. She made it to the finals of the 1967 Miss America pageant in Atlantic City, New Jersey.

Afterward, Grooms married an airline pilot and began practicing as an interior designer. She designed the "Henley Room" at UAB's Mervyn H. Sterne Library in 1972 and, as a principal with Southeastern Interior Concepts, decorated the Davenport & Harris Funeral Home in 1978 and redecorated the Redmont Hotel in the 1980s.

At the same time, Proctor also became interested in city politics. She garnered 27,335 votes in the 1971 Birmingham municipal election, earning a two-year seat. She was re-elected to a four-year term in 1973, but decided not to run again in 1977.