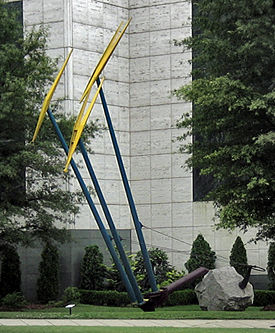 Antelumpen is a stone and metal interactive kinetic sculpture designed and constructed by sculptor Zachary Coffin and formerly owned by the Birmingham Museum of Art. It consists of three 18-foot utility poles painted teal, each with an abstracted yellow-painted steel antelope head, attached by hinges to a 14,000 pound boulder. A tube-steel "steering wheel" attached to cables allows viewers to rock the heads up and down, simulating grazing.

The work was begun at the Socrates Sculpture Park in New York, New York and was stored incomplete in Atlanta, Georgia until Coffin was offered space at Wade Sand and Gravel to complete it for a 1997 solo exhibition entitled "Industrial Jungle". The work was subsequently then purchased for the museum's permanent collection with the support of Dr Sam Barker. It was displayed outdoors on the southeast corner of the museum building after the exhibition.

It remained there until May 2010 when it was loaned to the Five Points West Library. CraneWorks donated labor and equipment for the move. Betty Gold's Kaikoo II was installed in its place.

Coffin's sculpture was damaged at the library site during the April 27, 2011 tornado outbreak. The museum offered to return it to the artist, and plans were made for Coffin to make repairs, after which it would go to a sculpture reserve in California. Craneworks returned to assist with removing the sculpture on July 1.