From Bhamwiki
(Redirected from Antwain Womack)
Jump to: navigation, search 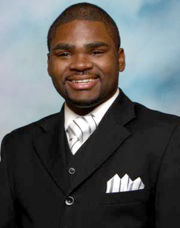 Womack dropped out of Wenonah High School as a freshman in 2004. On a Facebook page containing an error-riddled essay supporting his application for a "Netroots Nation" scholarship, Womack gave himself the title of "Bishop", called himself a "Doctor", and claimed to hold the office of "Director of Youth Affairs" for the Alabama Young Democrats. According to officials of AYD, he never held any office with that organization and the title he claims has never existed.

In the 2008 Jefferson County municipal elections, Womack ran for Mayor of Tarrant, but only garnered four votes.

Womack qualified to run for Birmingham Board of Education, District 6 in the 2009 election. During his campaign (motto: "Education Does Matter") he claimed to be two years older than he was, to have graduated from West End High School, and to have a bachelor's degree in elementary education from Alabama A&M University. The Birmingham News discovered the lies and reported that the address he gave was his aunt's house and that his actual residence was in Fairfield. Womack admitted to the lies about his age and education, but announced that he did live in District 6 and would remain in the race. The Birmingham News quoted him as saying "My values are not lies. It's just the information I provided to the people is false." 1

Two days later he scheduled another press conference in order to announce that he was dropping out because "This race has just gotten to be too much for me." 2 He did not appear for the announced press conference. The following Sunday, August 22, Womack changed his mind again, issuing the following statement:

Today I am re-assuring the voters of my district that has expressed their continuing support in my campaign in spite of my false statements about my pass. I will not comment publicly about my allegations anymore, however now is time for me to express my thoughts on why I am in this race. Early part of the year I questioned about running for the school board and which district to run for, and also talked with my friends and now supporters that encouraged me to enter the race.[sic]3

Womack went on to identify Carole Smitherman and LaShunda Scales as people who have encouraged him to enter the race and supported his campaign. Both Birmingham City Council candidates disclaimed any such support. In the August 25 election, Womack came in distant fourth with 117 votes (3.4%).

In 2010 Womack filed qualification papers for to run for Jefferson County Board of Education, challenging Jacqueline Smith in the Place 5 seat she has held since 1986. He was the first candidate to qualify, but later withdrew, leaving Smith unopposed. Womack told the News that since 2009 he has taken the General Educational Development (GED) exam, but had not received his results.

In 2013 Womack again qualified for the Birmingham Board of Education, this time in District 8, challenging April Williams. During the campaign he voiced intentions to increase job opportunities for graduates by working with local businesses and focusing the system's job cuts on high-salary positions.