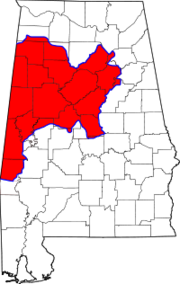 205 is the North American telephone area code for central and western Alabama including most of the cities in the Birmingham District. From when the first area code plan was introduced in 1947 until 1995, this area code served the entire state of Alabama. It then split, with the new area code 334 covering south Alabama, including Montgomery and Mobile. Area code 205 was split again in 1998, with area code 256 covering north and northeast Alabama, including Cullman, Muscle Shoals, Huntsville, and Anniston.

Area code 659 was approved as an overlay area code by the Alabama Public Service Commission to provide numbering relief for the 205 area in 2018.