From Bhamwiki
(Redirected from Arlington Antebellum Home and Garden)
Jump to: navigation, search 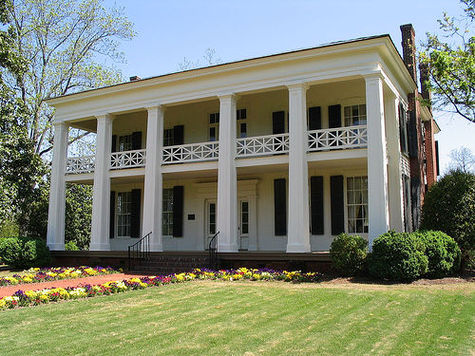 Arlington Antebellum Home & Gardens is a mansion built by Judge William S. Mudd, who went on to join with the Elyton Land Company in the founding of Birmingham in 1871. The house, which formerly commanded hundreds of acres, is currently located on a 6-acre lot at 331 Cotton Avenue Southwest in the Arlington-West End neighborhood of Birmingham. Owned by the City of Birmingham, it serves as a historical interpretive museum and reception hall.

The 475-acre property was purchased in 1822 from William O. Tarrant and John Burford Sr by Stephen Hall, a trustee of the Jefferson Academy. Hall erected a log house on the knoll, along with various outbuildings, including a blacksmith's shop. Over time he enlarged the home to two stories with four main rooms. At his death, the property was inherited by his son, Samuel, who depleted his wealth, forcing the sale of the house and grounds at auction in 1842.

Mudd bought the estate at auction. In 1846 he married Florence Earle and began building a larger home in place of Hall's, which he called The Grove for the numerous old hardwoods surrounding the house site. With the help of his slaves, Mudd constructed a grand eight-room mansion in the Greek Revival style. The shallow hipped roof projected over a double-height gallery, with its cornice supported on six square columns. Four brick chimneys provided a hearth for each chamber, which the Mudd's filled with 10 children.

From 1843 to 1848, Mudd served in the Alabama legislature. In 1856 he was elected Circuit Judge, a position he held until his health forced retirement in 1883. During Wilson's Raid in the Spring of 1865, the house was commandeered as a temporary headquarters for General James H. Wilson and his staff. While there, Wilson made plans for General John T. Croxton to lead a detached brigade to Tuscaloosa to burn the University of Alabama, which had trained cadets for the Confederacy and was operating a hospital for soldiers. Wilson's use of the home helped spare it from destruction.

When Mudd died in 1884, Colonel Henry Debardeleben purchased the house as an investment. He never lived there, and soon sold it to Franklin H. Whitney of Cass County, Iowa, who converted it for use as a boarding house and subdivided some of the property into lots for sale. The house was purchased in 1902 by Robert Munger, owner of Continental Gin Company which manufactured cotton gins in Avondale. It was Munger who dubbed it "Arlington", a reference to the estate of Robert E. Lee in Virginia. He continued to divide the former plantation to provide houses for his children as they married. Munger died in 1924 leaving the main house to his daughter, Ruby and her husband, Alex Montgomery. They resided there for nearly three decades, putting the property up for sale in 1952.

Members of the Elyton-West End-Powderly Civic Club, led by Fred Melof, rallied numerous civic organization to petition Birmingham's Department of Parks and Recreation to purchase the house as a Confederate memorial and museum. Mayor Cooper Green and commissioner Jimmy Morgan supported their efforts, but declined to commit funds from the city budget. A steering committee headed by Morgan Smith began raising money to make the purchase, which was completed in 1953 for $53,000. The house was restored and furnished by the Arlington Historical Association and soon became one of the signature landmarks for visitors to Birmingham.

Tours of the home are available on Tuesdays through Sundays, and the restored tea-room can be reserved for private parties. The rooms are furnished with antiques from the Antebellum period, many of them original to the house. The home also displays a notable collection of 19th century decorative arts and paintings.

The house serves also as a decorative arts museum, featuring a collection of 19th-century furniture, textiles, silver, and paintings. Arlington has gardens and a restored garden room named the Tea Room that is used for private and club events such as weddings, meetings, and food-service events.

The site was added to the National Register of Historic Places in 1970. The ashes of former mayor George Seibels, who died in 2000, are interred at Arlington.

In 2008 the exterior of the house was repaired and repainted. Visitors' restrooms were enlarged to accommodate the disabled and ramps were constructed to improve wheelchair access to the restaurant, gift shop and museum. Additional work planned for 2009 includes opening the restaurant up toward the formal garden and renovating its interior.