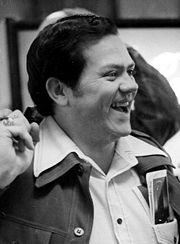 Aubrey Edwards in the 1970s

Edwards graduated from Samford University and the Southwestern Baptist Theological Seminary in Fort Worth, Texas. He started directing choirs as a senior in high school. While at Samford, he was hired as organist and assistant youth director at First Baptist Church Trussville. After a year, he moved to Gardendale First Baptist Church, serving as music minister until his graduation.

Edwards founded the "Sound of Singing Youth", a traveling youth choir, while serving the First Baptist Church of Hendersonville, Tennessee. After being hired at SMBC by then-pastor Charles Carter, he launched a similar group in Birmingham, called "New Wind".

As music minister, Edwards directed the church's well-known outreach programs: Starlite in the summer, and the Birmingham Christmas Pageant each December. He also assisted with organizing the Christmas tree lighting events at the Riverchase Galleria. He was succeeded at SMBC by Michael Adler.

In retirement, Edwards continued to assist small churches with music programs until his health declined. He died from cancer and kidney failure in November 2010. He was survived by his wife; three daughters; Lisa, Kim and Sondra; and five grandchildren.