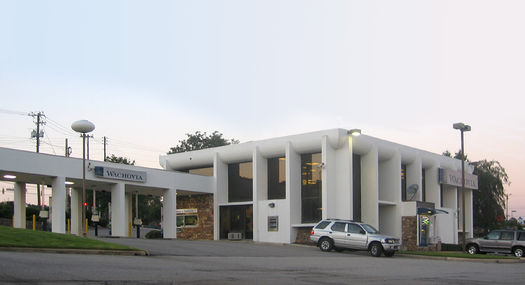 The BTNB Eastwood branch was a large branch office for Birmingham Trust National Bank, built in 1969 at 5389 Oporto-Madrid Boulevard, just off the southeast corner of Oporto-Madrid and Crestwood Boulevard, in front of Eastwood Mall.

Architect Don Morrison's design for the bank branch was strikingly modern, with bold contrasts between massive, slope-sided rock piers and tall, elegant white concrete fins supporting the curved roof edge. The bank vault was designed as a discrete rocky mass which protruded through the wall of the banking lobby on the northeast corner.

A set of four thick piers supported drive-through stations on the west side of the building, but these were later replaced with thinner white columns to make room for a fourth lane.

A tall triangular sign announced the location of the bank.

In 1981 BTNB was renamed "SouthTrust Bank". In 2005 SouthTrust was taken over by Charlotte, North Carolina-based Wachovia Bank. In December 2006 Wachovia completed a new prototypical branch on Montevallo Road, at the front of the new Eastwood Village shopping center under development.

The 1969 building closed on December 6, and was demolished soon after as part of the development of the shopping center.