From Bhamwiki
(Redirected from B & A Warehouse)
Jump to: navigation, search 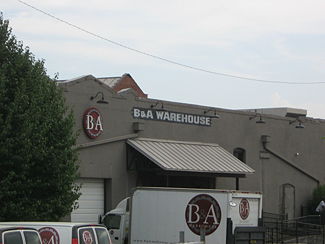 B&A Warehouse is an event facility and catering company located at 1531 1st Avenue South, across from Railroad Park. It opened in 1999 in the former Jefferson Plumbing & Mill Supply Company warehouse. Craig Rogers of Designform was the architect for the renovation work.

B & A is named for its original owners, Bill Mudd and Art Durkee. Mudd, an attorney with Whitaker, Mudd, Simms, Luke & Wells, currently owns 89% interest in the property through his First Avenue Development LLC while Durkee's heirs own the remaining 11%.

The event center is managed by a separate company, Durkmud, Inc, owned by Susan Mason and Alison Nichols, Mudd's wife.

In 2011 the land on which the business sits was proposed as part of the location for a new downtown baseball stadium. Mudd accused city leaders of ignoring his desire to remain at the location and have the building incorporated into the proposed development. The building was spared and is adjacent to Regions Field and the Negro Southern League Museum.

The warehouse was the first site for Sunday evening worship services of Iron City Church. The congregation met there from 2014 to 2018, when it moved to the auditorium of Ramsay High School.