Barber's Dairy (formerly the Barber Pure Milk Co.) is the oldest active dairy business in Alabama. It was founded in 1921 by George Barber. Its production facility is located at 36 Barber Court off West Oxmoor Road in Birmingham with distribution facilities across the region.

During the 1930s, Barber's operated its own ice plant which gave it a competitive advantage over other suppliers in the city. Barber became an outspoken advocate the the pasteurization of milk and milk products. His efforts were influential in the establishment of the "Grade A Pasteurized Milk Ordinance" within the U. S. Public Health Service.

Through the 1940s, '50s and '60s, Barber's acquired numerous smaller dairies across the region. During World War II the processor purchased dairy cows from the upper midwest and distributed them to their local network of dairy farmers. Barber's introduced the wax-coated paperboard milk carton in 1949 and was among the first to switch from translucent to opaque plastic cartons in the 1980s.

Barber's erected a landmark advertising sign, the Barber's clock, on the Shepherd-Sloss Building near Five Points South in the 1950s. It remained in place until 2004. In 1960 the company operated two cafeterias at Eastwood Mall, which it later sold to Britling Cafeterias. In 1971 the company opened a new ice cream plant, and a year later Barber added a 40,000 square foot dairy plant capable of producing 750,000 gallons of milk per month to its 27-acre campus. 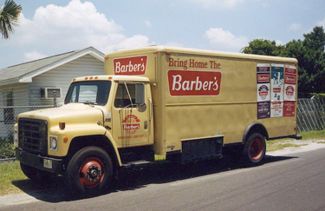 A Barber's truck in Panama City, Florida in 1999

The company was sold to Dean Foods of Dallas, Texas in 1997 and operates as a brand name division for that company's milk, ice cream, cottage cheese, dips and sour cream in Alabama, Mississippi, northern Florida, and southern Georgia. The company soon merged its ice cream production under the Mayfield Dairy Farms label and also began supplying Baskin-Robbins. Dean was acquired by Suiza Foods, also of Dallas, in December 2001. The combined company operates as Dean Foods.