Barber was an experienced race car driver in the 1960s before he took over operation of his family's Barber's Dairy company. He continued to restore vintage sports cars in a company warehouse as a hobby, which grew into a collection by 1988. At the suggestion of his friend, fleet manager Dave Hooper, Barber switched his focus to motorcycles, where there was a better opportunity to pursue a world-class collection. Hooper's 1991 gift of a 1952 Victoria Bergmeister inspired Barber to appreciate the motorcycles as works of art. 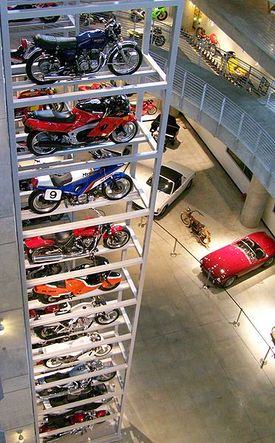 As the motorcycles came into the warehouse on 5th Avenue South in Lakeview, they were placed inside plexiglass-fronted wooden crates to protect them from the dusty interior environment. The stacked crates soon became a spectacle for visitors, and Barber incorporated the museum as a non-profit in 1994 and opened the collection, then numbering 325 bikes, for two days a week, beginning on March 4, 1995.

Around the same time, Barber also began restoring vintage bikes to racing condition, assembling a motorcycle racing team which served to promote the collection as a "living museum." The team won seven races during its run from 1992 to 1998.

In 1997 Barber loaned twenty-one pieces to the Guggenheim-curated exhibition "The Art of the Motorcycle," which opened in New York City and toured to Chicago, Illinois and Bilbao, Spain.

The museum operation provided the inspiration for the Barber Motorsports Park, which was initially conceived of as a slightly-larger facility for display and a small track to test out the restored bikes.

In 1998 Barber sold the dairy business to Dean Foods, then based in Illinois, and turned his attention to developing a much more ambitious motorsports park including a full-scale race course with a massive new museum building. The 740-acres development represented an initial investment of about $54 million. Barber moved the still-growing collection to its present location overlooking the race course in 2003. It opened its doors on September 19 of that year.

The design of the 144,000 square foot concrete and steel motorsports museum drew inspiration from the Guggenheim Museum of Art, a landmark Frank Lloyd Wright design with a continuous ramp connecting all levels of galleries. The spacious, light-filled exhibition halls are open to each other and to a large central atrium, allowing visitors to view large swaths of the collection from any single vantage point. The displays are grouped generally by historical era, rather than by manufacturer, demonstrating the evolution of motorcycle design.

The museum was expanded in 2016 to nearly 250,000 square feet. In addition to exhibition space, it also houses offices, machine shop, a 5000-volume research library and gift shop. All five levels of the museum are connected by a central glass-walled freight elevator. The 2016 expansion created space for temporary exhibits, an outdoor terrace, and a large glass atrium. Williams-Blackstock Architects designed the expansion, which was constructed by B. L. Harbert International.

Both sections of the museum, which adjoins the straightaway between turns 8 and 9, provide expansive views over the race course. A pedestrian bridge, completed in April 2015, connects the museum to the track's infield. Los Angeles, California-based Large Architecture provided schematic designs for expanding the museum on the infield side of the bridge before it was determined to build the new gallery spaces abutting the existing museum.

Many of the pieces in the collection are maintained in racing shape and are ridden on Vintage racing circuits by the Barber Vintage Motorcycle Team. In 2014 the Guinness World Records organization certified the collection as the "world's largest motorcycle museum".

An exhibit of O. V. Hunt photographs offer a glimpse of how motorcycles played a part in Birmingham's history during the early 20th century.