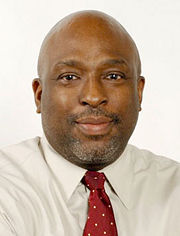 Barnett Wright (born c. 1961) is the executive editor of the Birmingham Times.

Wright grew up in Philadelphia, Pennsylvania and worked at the Philadelphia Tribune, eventually as managing editor. He moved with his family to Birmingham in 2000 to take a reporting job at the Birmingham News, where he covered Jefferson County government.

In 2012 Wright completed the commemorative book, 1963: How the Birmingham Civil Rights Movement Changed America and The World, which was published by the Alabama Media Group. Wright was laid off from the newspaper in 2015 and became a contributor to the investigative news site BirminghamWatch.

In 2016 Wright was named executive editor for the Times, which had recently been acquired by the Foundation for Progress in Journalism.