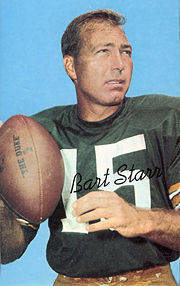 Bryan Bartlett Starr (born January 9, 1934 in Montgomery; died May 26, 2019 in Birmingham) was a professional football player and coach. Wearing #15, he was the quarterback for the Green Bay Packers (1956-1971) and the Most Valuable Player of the first two Super Bowls. He earned four Pro Bowl selections and was inducted into the Pro Football Hall of Fame in 1977. The son of an Air Force non-commissioned officer, Starr played High School football at Lanier High School in Montgomery, where he earned a spot in the school's Hall of Fame, college football at Alabama, and was a 17th round pick (200th overall) in the 1956 NFL draft. After his playing career, Starr was the head coach of the Packers for nine seasons (1975-1983), compiling a 52-76-3 record.

Starr was drafted in the seventeenth round of the NFL Draft in 1956, out of the University of Alabama. He was a backup to Tobin Rote and Babe Parilli until 1959, Vince Lombardi's first year as Packers coach. In that season, Lombardi pulled starter Lamar McHan in favor of Starr, and he held the starting job henceforth. In just two seasons, Starr would lead his team to NFL Championships in 1961 and 1962.

Starr was responsible for calling plays when he was quarterback, as was the norm at the time. One of his most famous play calls was in the Ice Bowl against the Dallas Cowboys in the NFL championship game on the final day of 1967. Instead of handing off (as the play was designed), Starr snuck the ball himself, and with the winning touchdown, the Packers won their third straight NFL championship, the fifth in seven years. Two weeks later in Miami, the Packers defeated the AFL champion Oakland Raiders 33-14 in Super Bowl II, Lombardi's final game as head coach. Starr's playing career ended at the conclusion of the 1971 season.

Immediately after his retirement as a player, he served as an assistant coach (quarterbacks) in 1972, when the Packers won the NFC Central division title at 10-4. Starr became head coach of the Packers three years later, in 1975. His regular season record was a disappointing 52-76-2 (.408), with a playoff record of 1-1. Posting a 5-3-1 record in the strike-shortened season of 1982, Starr's Packers made their first playoff appearance in ten years (and their last for another 11 years). They defeated the St. Louis Cardinals 41-16 in the expanded wildcard round of 16 teams on January 8, 1983, then lost to the Dallas Cowboys 37-26 in the divisional round the following week. After a disappointing 8-8 finish the following year, Starr was dismissed in favor of his former teammate, Forrest Gregg.

In 1965, he and Cherry helped co-found Rawhide Boys Ranch in New London, Wisconsin, a facility designed to help at-risk and troubled boys throughout the state, and remained affiliated with it throughout his life.

In 1999, he was ranked number 41 on The Sporting News' list of the 100 Greatest Football Players.

Starr was one of five Green Bay Packers to have his number (15) retired by the team.

Starr has an NFL award named after him. The Bart Starr Award is given, by a panel of judges, to the best Christian player in the NFL.

In 1997, an episode of the animated television series The Simpsons was titled Bart Star. In the episode, Bart Simpson is elevated to the team's starting quarterback by his father and team's new coach, Homer, replacing Nelson Muntz. Joe Namath, who won the Super Bowl MVP award in Super Bowl III after Starr won the award in the first two games, and like Starr is a University of Alabama alumnus, appeared as himself in the episode.

In retirement, Starr resided with his wife in Hoover. He suffered a stroke in 2014 and died in May 2019 after a period of declining health.