Battle for the Bones 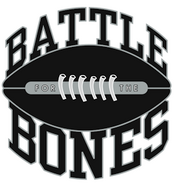 The Battle for the Bones was an annual college football game played between the University of Alabama at Birmingham Blazers and their then-Conference USA Eastern Division rivals, the University of Memphis Tigers from 1997 until 2012. UAB won 10 of the 15 games.

The "Battle for the Bones" name was introduced for the 2006 match-up at Legion Field which was accompanied by a barbecue competition and the debut of a 100 pound bronze casting of a rack of ribs created by Sloss Metal Arts artist Heather Spencer which will be displayed by the winner of each year's game.

The UAB-Memphis series dates back to 1997, with Memphis winning 28-7 at Liberty Bowl Memorial Stadium. Memphis also won the next meeting, in 1999 in Birmingham, but UAB dominated the series for the next seven years until Memphis won the 2007 contest at home 25 - 9.

The new rivalry was created by the athletic departments at UAB and Memphis, along with the schools’ student government groups and student support groups, Gang Green and Blue Crew. The annual barbecue competition is staged outside of the stadium on the afternoon of game day. Entrants from both cities compete in either the professional or the "tailgater" division, with a total of $4,000 in prize money given to the winners.

The most recent matchup occurred during the 2012 season as Memphis moved to the Big East Conference the next season.

Judging for the inaugural barbecue competition was handled by Troy Black, Mike Davis, Jake Arians and Jim Cloud, who sampled 10 ribs from each of 20 competitors.