From Bhamwiki
(Redirected from Bearcat Brown)
Jump to: navigation, search 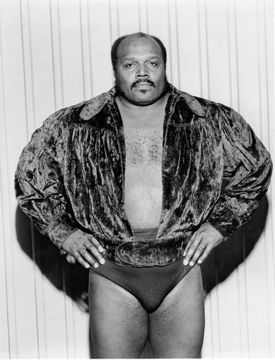 Matt Jewell (died in the 1980s in Nashville, Tennessee), also known as Bearcat Brown and Fatback Brown, was a professional wrestler who worked “colored” matches for promoters Nick Gulas and Roy Welch in the mid 1960s. He played the heel and Prince Pullins was often his babyface opponent.

In 1969, as Bearcat Brown, he became one of the most popular wrestlers to ever appear in Birmingham when he formed a tag-team with Len Rossi and broke the color barrier on Boutwell Auditorium wrestling cards. They won the World Tag Title and packed Boutwell for the next three years with both black and white fans.

Brown often finished opponents with a head-butt, or just the threat of delivering one.

After Len Rossi’s career-ending accident in 1972, his son Joey began teaming with Bearcat. He also won titles with Don Carson and Johnny Walker.