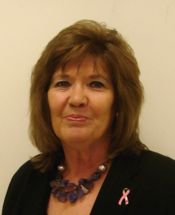 Johnson and her family moved to Clay in 1974 from Houston, Mississippi. She assisted husband A. J. in his construction business and served in numerous positions for Jefferson County Schools. In 2000, she opened the Clay gift shop Rebecca J's, and organized the Clay Area Chamber of Commerce in 2004. She was elected to the city council in 2012. Johnson is currently Clay's mayor pro-tem.

In 2014, Johnson's son Bo was chosen to finish the last two years of Mark Halstead's city council seat after Halstead relocated outside of Jefferson County.