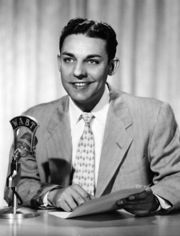 Benny Carle DiGesu (born c. 1925 in Birmingham; died October 2, 2014) was the first children's television host in Birmingham, starting with Western Theatre on WABT-TV, Channel 13 and continuing with the Circle 6 Ranch and the Benny Carle Show on WBRC-TV, Channel 6.

Carle grew up in Birmingham and attended Glen Iris School and Ullman School before graduated from Ramsay High School. He served in the US Merchant Marines during World War II and was a drummer in band led by Buddy Clark. He formed his own combo after returning home to Birmingham in 1945, playing while he attended classes at Birmingham-Southern College. While there he found a job at WVOK-AM and became friends with Joe Rumore. After graduating he moved on to a station in Gadsden, but was invited back to WAPI-AM by Lionel Baxter.

Baxter asked Carle to introduce some afternoon western films on the station's new television affiliate, WABT, in 1948. He borrowed some cowboy clothes from Happy Wilson and made his on-camera debut that day. Soon the program added a live studio audience of children, pioneering the format on local television. Once rival WBRC constructed a studio a few years later they copied the format of Carle's Western Theatre with their own Circle Six Ranch hosted by Bob Bandy with an audience of thirty children. In 1954 they recruited Carle to come over and take Bandy's place. His departure left room for the debut of Cousin Cliff Holman on WABT.

In 1960 the format was switched from western features to Looney Toons shorts, as the Benny Carle Show. A prop television was constructed for the set, which Carle called the "frammishlocker". In 1964 Carle left Birmingham to take a job with WAAY-TV, Channel 31 in Huntsville. After six months he bought a stake in Decatur's Channel 23. He eventually amassed a majority stake and moved the station to Huntsville as Channel 48. He continued to host his kids' show, dressed as a carnival barker in a zebra-striped jacket, until 1976.

In 1978 Carle bought a radio station in Florence, re-naming it WBCF-AM (for "Benny Carle, Florence"). He expanded it into FM and TV as well.

Carle died in 2014. He was survived by his wife, Patricia and three sons, Benji, Jay and Jim.