From Bhamwiki
(Redirected from Bessemer Cut Off)
Jump to: navigation, search 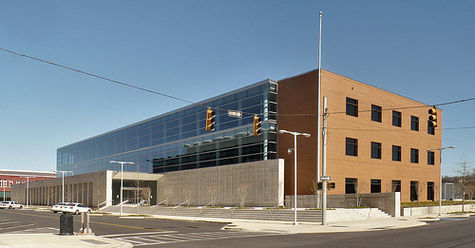 Construction of the $38 million building began on the downtown block between 18th and 19th Streets North at 2nd Avenue on April 10, 2007 and was completed in the Spring of 2009. It was designed by Giattina Aycock Architecture Studio and features a long wall of insulated security glass to visually reinforce the notion of "transparent justice". The lower facade is clad in Alabama limestone and the plaza and lobby are paved with Sardinian granite. The one-story entrance plaza features a green roof, visible from the adjacent stairways. Rainwater from the main roof is collected in a 20,000 gallon underground cistern for irrigation. Courtrooms are paneled in native White oak. It is linked to the adjacent Jefferson County Jail Bessemer Division.

The ground floor of the courthouse houses a jury assembly room, offices of the Bessemer cutoff district attorney Bill Veitch and district and circuit clerks, and UAB's Treatment Alternatives for Safe Communities program. District court is held on the second floor, and circuit court on the third. A 110,000 square-foot three-story parking deck is located behind the courthouse with space for 350 cars. The existing Bessemer Courthouse was renovated for use by Jefferson County Family Court and for offices.

In 2005, at the suggestion of Larry Langford, The Jefferson County Commission voted to name the building the Private George Watson Criminal Justice Center in honor of World War II hero George Watson. In 2007 the Commission reversed that decision. The building remains dedicated in Watson's honor, and displays a portrait bust by sculptor Branko Medenica.

Construction of the building was completed in October 2009, but, owing to a financial crisis, it was left unopened until June 2010 in order to avoid initiating operational costs.

The 414-capacity jail went unused until December 2013, when reductions in lease payments negotiated as part of the county's exit from bankruptcy allowed the Sheriff's department to staff the facility. At that time about 200 inmates were transferred from the Mel Bailey Criminal Justice Center in Birmingham.

In the Summer of 2012, the Commission considered abandoning the new building and operating courthouse functions from leased space in Westlake Mall. In September the Commission negotiated reduced payments and a lease extension.