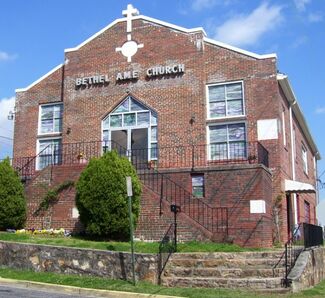 Bethel A.M.E. Church was founded in 1888. The first church building, a wooden structure, was erected in 1899 at the church's current location. This church was later destroyed by fire while the sexton was attempting to light the gas lights for service.

In 1913, a brick church building was built on the site. The church's inner sanctuary was later destroyed by fire, but rebuilt. In the 1930s the church hosted high school classes while Rosedale High School rebuilt from fire.

In 1946, the brick church was totally destroyed by another fire. While the church was being rebuilt, services were held at Rosedale High School and the parsonage. The basement floor, which was damaged when the church bell fell through it during the 1946 fire, was finally restored in 1950, allowing the congregation to once again use the church for services. The church building was completed in 1957.

During the 1950s and 1960s the church hosted meetings for leaders and participants in the Civil Rights Movement. In the early 2000s the congregation experienced a split.