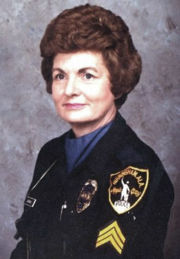 Jensen and fellow officer Ann Saunders had worked as meter maids before becoming the first female officers to work for the department in 1959. Jensen was first assigned to traffic duty and continued to work from the East Precinct, sometimes driving a Cushman motorcycle.

Jensen spent much of her career providing security at the Birmingham Municipal Airport. She helped established the airport's first chapel to provide comfort to families of Vietnam War veterans. She was an active member of Taylor Memorial United Methodist Church.

Jensen died in 2014 and is buried at Jefferson Memorial Gardens in Trussville. She survived her husband, Garth Jensen and was survived by three children, six grandchildren and two great-grandchildren.