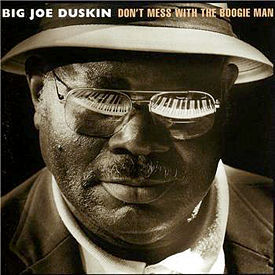 Duskin was the ninth of eleven children born to pastor Perry Duskin in Birmingham's Collegeville neighborhood. He began playing piano at age seven and was soon accompanying his father's sermons in church. He moved with the family to a house near Cincinnati, Ohio's Union Station while still a boy. He continued to practice piano, influenced by the music of Fats Waller and Pete Johnson which he heard on WLW-AM.

As a teenager he began playing at clubs in Cincinnati and Newport, Kentucky. He continued to play after joining the U. S. Army for World War II, eventually meeting his idols, such as Johnson, Albert Ammons and Meade Lux Lewis. His father did not approve of his playing popular music and secured his son's pledge to seek other work. As Duskin told it: "My dad was a minister, and he was kind of fanatic over religion. When he first knew that I was playing piano, he said 'Don't you never play that devil's music in here. I'll tear you up if I catch you playing that.'" Then years later, when his father caught him playing a blues tune, "The old man come in there and jumped on me. Now, when he got done whipping me, I said, 'Pop, you might as well get with it. This is what I want to do.' He looked at me and said, 'Joe, I'm 89 years old. I'm not going to live too long. Why don't you just make an agreement with me not to play the devil's music till I'm dead in the grave?' Well, I shook his hand and I never played a lick. And the old man died at 105."1.

Instead of playing, Dunstan became a police officer and later a postal worker. In the early 1970s blues historian Steven Tracy encouraged Duskin to resume his music. He made several public appearances at local clubs and in regional and international music festivals. He released his first record, Cincinnati Stomp, in 1978 on Arhoolie Records. His sound won numerous fans in England after a 1987 tour there. He appeared in John Jeremy's short film "Boogie Woogie Special" which aired on The South Bank Show.

In 1988 Duskin recorded a follow-up album, Don't Mess with the Boogie Man. He continued to tour and performed at the New Orleans Jazz and Heritage Festival and the Chicago Blues Festival while touring Europe each summer and recording for several European labels. His last American record was Big Joe Jumps Again!, recorded at Cincinnati's Monfort Heights United Methodist Church in 2004 for Memphis' Yellow Dog Records. Fellow Cincinnatians Phiilip Paul, Ed Conley and Peter Frampton also performed on the record.

On July 31 of that year Duskin was presented with a key to the city by Cincinnati mayor Charles Luken. He also received a heritage fellowship award from the Ohio Arts Council.

Duskin died in May 2007 while awaiting a double amputation required due to the ravages of diabetes. A "Big Joe Duskin Education Foundation" works to preserve appreciation for blues and boogie-woogie music.