Riccio was arrested and charged under federal law for possession of an illegal sawed-off shotgun in 1979. He was sentenced to probation on that charge. He was also convicted on a marijuana possession charge in 1985. In 1989 he pleaded to misdemeanor charges resulting from fights between Klansmen and protesters at a 1979 demonstration in Decatur sponsored by the Southern Christian Leadership Conference. He served one year at federal prison in Atlanta, where he converted his affiliation from the Klan to the Skinheads.

In November 1991 Riccio and John Handley, of the militant Invisible Empire, Knights of the Ku Klux Klan, jointly led a major gathering on Handley's farm in Fultondale. The gathering was monitored by local law enforcement from just beyond the property, and was attended by "more than 125 Skinheads and a handful of Klansmen".

With his mostly young, male recruits, Riccio set up shop in a "WAR House" in Shelby County, providing beer, liquor and guns to the boys, at least three of whom later accused him of sexual abuse. They were often joined by members of the Confederate Hammerskins and actively recruited new members at high schools and youth hangouts. 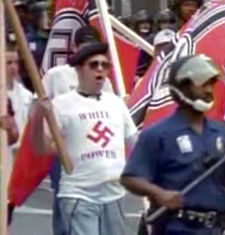 On April 18, 1992 three people who had attended a party at the WAR House went out on a "bash". They found 35-year-old Benny Rembert sleeping under the 24th Street Viaduct at Morris Avenue and stabbed him, then dragged him to the Railroad Reservation where they caused his foot to be severed by a passing train. Rembert died. Four of his assailants were convicted of murder and sentenced to between 25 years and life in prison, and two others of manslaughter. One was sentenced to 20 years and the other to 9 months. Meanwhile, on June 13, 1992, the ANF and Invisible Empire held a joint march through downtown Birmingham. Throughout that year, Riccio's activities were being recorded by a film crew for the 1993 HBO documentary "Skinheads U.S.A."

Following the arrests, police raided the WAR house and found guns and hand grenades, and arrested Riccio on weapons charges. He pleaded guilty to violating federal laws preventing convicted felons from hiring armed bodyguards. He served 15 months at the Three Rivers Federal Correctional Institute in Texas, and returned to Birmingham in May 1994 to serve eight years of supervised probation, during which he was allowed no contact with any white supremacist organizations. The Aryan National Front did not survive the upheaval.

Riccio, who prayed to the Norse god Odin as a Neo-Nazi, eventually assumed the mantle of "Imperial Kludd" (chaplain) in the North Georgia White Knights of the Ku Klux Klan.