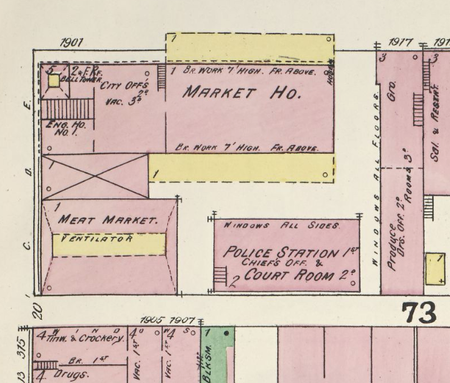 The Birmingham City Hall constructed in 1882 was the first permanent municipal government building in Birmingham. The three-story brick building was completed in 1882 with funds from the city's municipal bonds, issued under the seal of the Elyton Land Company.

The building featured arched openings facing 19th Street and 4th Avenue North for Birmingham Fire Station No. 1 and for market halls. The roof was punctuated with a tall wooden tower at the corner. The Birmingham Police Department and Birmingham Municipal Court occupied a separate structure on the interior of the block.

In 1884 the City Hall building appeared in a sensational and fraudulent news item penned by Joe Mulhattan. He described a huge river flowing beneath the city, which was built on a thin "crust" of stone a few feet thick. He claimed that the City Hall had settled 4 feet on one corner into a widening fissure in the earth. The story was published as fact in the Louisville Courier-Journal and subsequently picked up by other newspapers. The city was "flooded with telegrams" inquiring about the calamity over the following days.

The structure served for nearly 20 years before Mayors Frank Evans and Mel Drennen oversaw construction of a massive replacement on the same site.