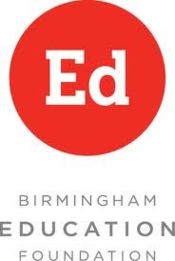 Board chairs have included Fred McCallum, Will Ferniany, and Lawrence Conaway.

The organization, founded in 2008, grew out of the planning efforts of the Yes We Can! Birmingham campaign, which was launched in 2007 by the Birmingham Business Leadership Group and the Community Foundation of Greater Birmingham. The group's marketing efforts have been helped by a year's worth of pro bono advertising and design services from Cayenne Creative.

The foundation outlined four major goals for its efforts with the system:

In August 2011 the foundation held a series of public meetings to report on progress. Implementation of a Parent University was beginning. Career academies were under way at city high schools, with sponsorship from local businesses secured by the foundation. Professional learning communities were being formed at each school and teachers were being trained to increase advanced placement opportunities.