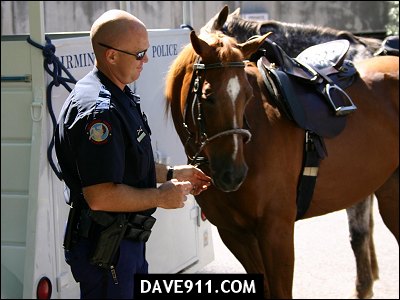 A mounted patrol officer and mount in 2004. Courtesy "Dave's Place" 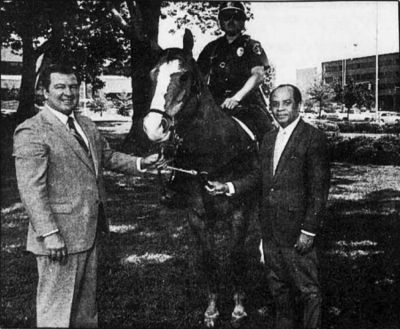 The Birmingham Police Mounted Patrol was a special unit of the Birmingham Police Department that utilized officers on donated horses on regular patrols and for crowd control and public relations assignments, including representing the department in the inaugural parades for presidents Bill Clinton and George W. Bush.

The unit, which was part of the Tactical Division, was created in the mid 1970s when the Five Points West Merchants Association donated Booger Red, who was named for police chief Bill Myers. One of the patrol officers was Errol Culpepper, who already had a habit of riding his horse on city streets to save on gasoline.

The division was supported by Myers' successor, Arthur Deutsch, and peaked at about 20 animals. In 1985 the unit moved from stables at the Alabama State Fairgrounds to a purpose-built stable facility on the UAB Campus. Mounted officers trained UAB Campus Police in handling the animals and using them in crowd control and public relations settings.

Suitable mounts were preferably geldings, 8 to 10 years old, taller than 15 hands, of breeds suited to hard work, such as quarter horses. After an initial screening the horses were given a 30-day trial which included exposure to smoke, sirens, gunfire and traffic. About half of the horses donated were accepted into the unit. Initial training consisted of 12 weeks, with refresher courses given twice a month.

The horses were usually retired in their mid-20s, Booger Red remained active at the age of 35, retiring in 2002. Non-"streetable" animals, who lost the temperament for regular patrols, were used for school programs and other planned events.

The unit dwindled to just one active horse in 2012 before the opening of the Uptown entertainment district at the BJCC and Regions Field prompted the department to expand again. Under Sergeant John Callahan the unit expanded to 10 horses in early 2013. In April of that year it was staffed by seven officers.

By 2020 the unit had again dropped to just three horses. That year the department announced the end of the program, citing budget concerns.