Blueprint Birmingham (formerly called the Greater Birmingham Regional Economic Development Strategy or Regional Economic Development Strategy and Implementation Plan) was a 5-year economic development plan for the 7-county Birmingham Metropolitan Area which was drafted in 2010 by Market Street Services of Atlanta, Georgia for the Birmingham Business Alliance. The plan was modeled on similar processes undertaken in other cities, including Austin, Texas and Pittsburgh, Pennsylvania. The 55-page report was unveiled at a public event in the newly-opened Railroad Park on September 23, 2010. 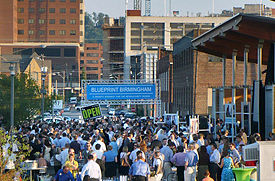 Unveiling of Blueprint Birmingham at the Railroad Park on September 23, 2010

The Business Alliance created a 40-member steering committee, chaired by Jay Grinney of HealthSouth and Rob Burton of Hoar Construction to guide the development and implementation of the plan. During the development of the scope of work, the need for detailed and measurable implementation strategies was continually stressed. Market Street proceeded by studying the region's competitive position on several measures of social, economic and perceptual conditions. More detailed analysis of "clusters" of related industries was undertaken to identify opportunities for economic expansion. Strategies for development were mapped out with reference to overcoming weaknesses identified through surveys and analysis. Guidelines for moving forward in specific, measurable steps were then elaborated as part of the plan.

The primary goal of Blueprint Birmingham was conveyed by its "vision statement": "The Birmingham region will provide abundant economic opportunities, excellence in education, and an unparalleled quality of life for all its citizens." The plan enumerated sixteen major objectives, divided between four primary goals: improving public and private leadership, expanding workforce development, cultivating economic prosperity, and fostering community and regional stewardship.

The first phase of implementation, occupying the last months of 2010, consisted of fund-raising and organizing committees. The BBA announced a 16-member "Implementation Committee" on January 19, 2011. The co-chairs were Rob Burton, president of Hoar Construction, Jay Grinney, president and CEO of HealthSouth, and Fred McCallum, president of AT&T Alabama.

In 2016 BBA president Brian Hilson reported several successes of the regional economic development plan. He noted a 45% annual rate of growth in new job creation, helping the metropolitan area rebound from overall employment of less than 500,000 in the Great Recession to more than 520,000 (still less than the 2008 peak of 533,400). He also noted a 100% increase in capital investments over the past five years, as compared 2000-2010. Hilson praised Birmingham mayor William Bell's skills in economic development efforts.

Hilson also made reference to an updated five-year strategic plan, called Blueprint 20/20, that would not be publicly released. That plan builds on Harvard economist Michael Porter's concept of "cluster development" in which several related business sectors are targeted for complementary growth.