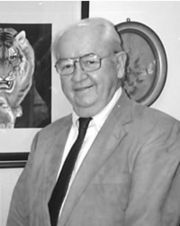 Russell, a Woodlawn High School graduate, played college football at Auburn University. He was a walk-on in 1934 for Shug Jordan's freshman team, lettered in 1936, 1937 and 1938, and played in the Bacardi Bowl in Havana, Cuba and the Orange Bowl in Miami, Florida. He was captain of the 1939 Blue-Gray Game and was selected in the 6th Round of the 1939 NFL Draft by the Washington Redskins.

Russell played two seasons at tackle and kicker for the Redskins and scored 38 points as a kicker. In 1941 he joined the Army and rose to the rank of Captain, serving in the South Pacific. He returned to Birmingham after his discharge and worked for the Massachusetts Mutual Life Insurance Company and sidelined as a Southeastern Conference official.

Russell was named to the Birmingham News-Age Herald's All-Time Team in 1943. An avid golfer, he coached Charlie Boswell in several golf tournaments.

In 1979, Russell was inducted into the Alabama Sports Hall of Fame.

Russell died in 1997 and is buried at Elmwood Cemetery.