From Bhamwiki
(Redirected from Bon Ton)
Jump to: navigation, search 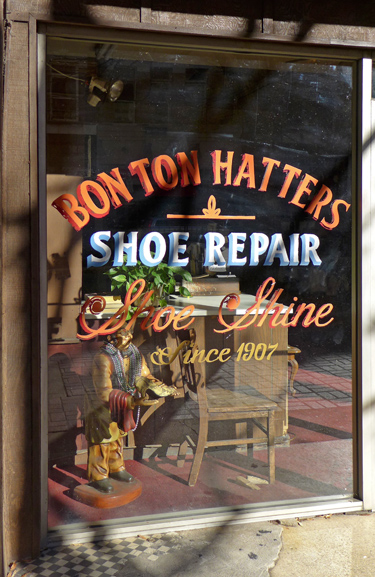 Bon Ton Hatters is a traditional hat and shoe repair shop on 20th Street North that was founded in 1907 by Constantine Callis and his son Jimmy Callis Sr, who had operated a shoe shop together in Greece before emigrating to the United States. They both worked for the Tennessee Coal, Iron and Railroad Company before opening their own shop in Birmingham.

When it opened, Bon Ton was one of dozens of hat shops Downtown. In the 1920s it was located at 204 or 206 20th Street North in the Roden Block building. When his father retired, Jimmy Callis Jr took over the business with a pledge to try to keep it open past the century mark.

The shop moved to 219 20th Street in 1979 and gradually became the only shop in the city where a hat could be properly cleaned and reshaped. With men's hats still out of fashion, shoe repairs and shines made up the larger part of Bon Ton's business. A row of shoeshine chairs along one wall stayed full of customers when the younger Jimmy began working. By the time he closed the business in late 2016 even that part of the business was struggling.

Callis, who owned the building and lived upstairs, sold the property when he retired in 2016.