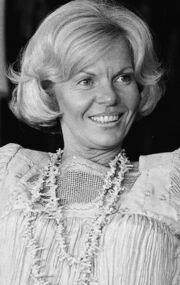 Bonnie Catherine Bolding Swearingen (born February 22, 1933 in Joppa; died August 2, 2020 in Birmingham) was an actor, a stockbroker, and a noted philanthropist.

Bonnie was the fourth of five daughters born to Orin Thomas and Gertha Bolding of Joppa, who also had two sons. She was blinded in one eye by a thrown pebble as a child. She won the Alabama Maid of Cotton pageant in 1953 and participated in four Miss Alabama pageants. She earned a scholarship to Howard College. She was active as a drum major, cheerleader and theater performer. She graduated in 1995 and completed an acting residency at the Pasadena Playhouse. She landed roles on the television series "Cheyenne", "Have Gun Will Travel", and "Alcoa Theatre", and also performed with Birmingham's Town & Gown Theater.

She married petroleum executive John David Manley III of Corpus Christie, Texas in 1958, then divorced him and married another oil magnate, Oscar Wyatt Kr of Houston, whom she divorced ten months later. She then moved to New York City and worked as a stockbroker for Shearson, Hammill. She earned a seat on the New York Stock Exchange, but decided against buying it when she learned she would not be the first woman to do so. She also served on the board of directors of Burlington House and on the advisory board for Bonwit Teller department store.

She met Standard Oil of Indiana CEO John Swearingen in 1969, who divorced his wife for her. Commentators referred to Bonnie's third marriage as an "oil change". She told the New York Times that she loved the smell of oil and that it, "should be bottled like perfume."

The couple split their time between Chicago and Palm Springs, California. John Swearingen became an increasingle visible spokesman for the petroleum industry during the 1970s energy crisis, and was highly critical of President Jimmy Carter and his newly-formed Department of Energy. He commissioned the 83-story Standard Oil Building in Chicago and traveled around the world with his wife. As a couple, the Swearingens pursued golf outings and big game hunting.

Among their many philanthropic activities, Swearingen was especially generous to her alma mater. Swearingen Hall, Samford's arts center, was named in her honor after her husband's death, at Brookwood Hospital, in 2007. She also served on the Fine Arts Department for the U.S. Senate, the Chicago Mayor's Committee for Economic and Cultural Development, and the New York Public Library Diamond Jubilee Committee. She was also active in supporting the YMCA, the Illinois Children's Home & Aid Society, and the Alliance Française in Chicago and on the national and Boys' Clubs board. She was the honorary chair for "Gala 75" celebrating the 75th anniversary of St Vincent's Hospital.

Swearingen died in 2020 and is buried at Elmwood Cemetery.