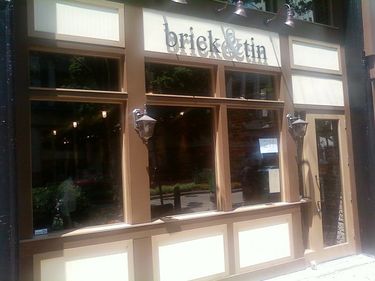 The restaurant is owned by Mauricio Papapietro, former chef de cuisine at Frank Stitt's Highlands Bar and Grill. Papapietro, a Birmingham native and Altamont School graduate, decided on the restaurant's name after the previous tenant's purple Sheetrock and 1980s-era white drop ceiling tiles were removed to reveal the circa-1905 building's bare brick walls and pressed-tin ceiling.

The redevelopment of the space was led by real estate developer Joseph McClure along with Erik Hendon of Hendon + Huckestein Architects.

Brick and Tin features an L-shaped bar with an open kitchen will run along the south wall of the building, allowing customers to sit and watch the chefs while they work. The menu features nine signature sandwiches served on bread baked fresh in the store. Along the north wall, patrons can sit on old pews salvaged from a church in Shelbyville, Tennessee and dine on tables found at flea markets and thrift shops. The restaurant seats about 50 customers.

Papapietro opened a second location of Brick & Tin in March 2014 at 2109 Cahaba Road in Mountain Brook Village. Transformation of the former Village Dermatology offices was overseen by Kyle D'Agostino and Appleseed Workshop. The Mountain Brook location bakes the breads used in both restaurants.

In 2019 the original location was remodeled. The interior brick was painted white and the bar was extended to the front of the dining area with new light fixtures. Service hours were extended to evenings and Saturdays, as well. The downtown restaurant closed in November 2020 as a result of the 2020 Coronavirus pandemic.