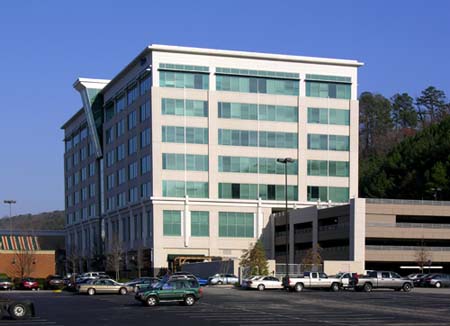 From the northwest in December 2009.

The Brookwood Village office building (formerly the Colonial Center) is a $35.8 million, 160,000 square foot, 9-story office tower located immediately to the west of Brookwood Village. It was completed in late 2007 for Colonial Properties Trust.

The building features 10,000 square feet of ground floor specialty retail, marketed towards service-industry tenants as well as a four-story parking deck in the rear of the building. Other features include built-in wireless internet, a covered walkway connecting the building to Parisian, and redundant power feeds from two separate substations to reduce the likelihood of outages. The architect was Joe Trammell of Rule Joy Trammell + Rubio of Atlanta and the contractor was Brasfield & Gorrie.

In January 2009 the project earned silver certification from the U. S. Green Building Council's Leadership in Energy and Environmental Design (LEED) program.

The building, along with the entire retail complex, was sold to Cypress Equities of Dallas, Texas in 2014. The office building itself was sold in 2016 to Preferred Apartment Communities of Atlanta, Georgia for $49.8 million.