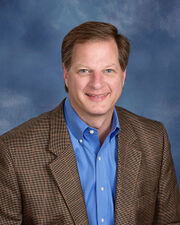 Buddy Champion is the pastor of First Baptist Church Trussville, taking the pulpit on August 27, 2006.

Champion was born in Pelham and is a graduate of Samford University and the Southwestern Baptist Theological Seminary in Fort Worth, Texas. He was a recreation assistant at Shades Mountain Baptist Church from 1985 to 1986, at which time he married his wife, Lynn Burdette, and enrolled in seminary.

From 1987 to 1989, Champion served as a student minister at First Baptist Church of Smithfield in Fort Worth. From 1990 to 1997 he was pastor of Shiloh Baptist Church in Sardis (south of Selma). He then took the pastorate at First Baptist Church of Decatur, where he helmed a period of enormous growth, with 1,100 members joining during his 9 years as pastor. In 2006 he accepted the position in Trussville. He also serves on the Board of Trustees for Samford.

The Champions have three daughters, Macie, Dailey and Grace. Champion has a pilot's license and enjoys flying, as well as other outdoor activities.