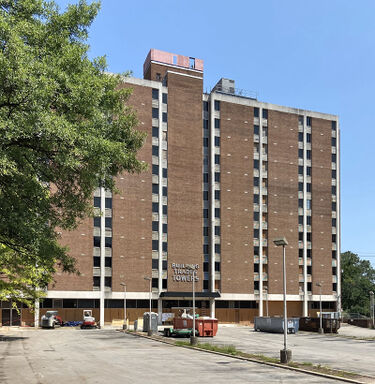 Building Trades Tower is a 107,881 square-foot, 12-story residential building located at 2021 10th Avenue South on the corner of Richard Arrington Jr Boulevard South, in Five Points South. It has been vacant since a fire which occurred in October 2015.

The building occupies the site of the former South Highland School, demolished in 1964. A pedestrian tunnel built for students still connects the property to Brother Bryan Park.

The brick-clad steel-framed tower was built in 1970 for the non-profit Birmingham Buildings Trades Towers, Inc., formed by W. T. Thrash, O. J. Reynolds and Wallace Withers as a project of the Birmingham Building & Construction Trades Council. The construction was financed with a loan from the U.S. Department of Housing and Urban Development (HUD). As part of the agreement, the building's use was limited to "senior affordable housing."

It was designed in a modern style by Charles H. McCauley Associates architects. The first floor lobby gave access to a recreation room, a chapel, and a library. A hair salon and a small grocery store have also occupied retail spaces on the ground level. Most of the building's 236 apartments were efficiency and one-bedroom units.

In June 2002 the owners were awarded another loan, along with a $115,000 grant from HUD to renovate the apartments. As utility costs rose that decade, the council, chaired then by Sammy Dodson, applied to HUD to raise the rent, but the request was denied. The lack of sufficient revenue forced the property into foreclosure, and it was purchased at auction in April 2005 for $4.2 million by Emmanuel Ku of New York. Ku's history of housing code violations in New York had led to a HUD rule preventing serial violators from purchasing new properties from the agency, but it was enforced on a state-by-state basis. Ku quickly amassed a number of properties in other states, including the Trades Tower.

Under changes in HUD policies, the Trades Tower became a magnet for veterans with Section 8 rent vouchers needing apartments close to the Birmingham VA Medical Center. Although Ku had pledged to invest as much as $2 million in new renovations, no work was done and conditions in the building quickly worsened. Lax security resulted in numerous unauthorized visitors and pets, including reports of homeless people gaining access to the lobby to shelter in the evenings. Numerous fire alarms sounded, most apparently false, but leaving residents stranded without use of the building elevators for hours at a time.

The City of Birmingham claimed in February 2011 that the apartments' owners were delinquent on $11,790 in occupational taxes and business license fees. The note on the building's loan was auctioned that August with an opening price of $2 million.

The building has been evacuated three times due to fires in the early 2000s. A small fire occurred on the 7th floor on January 31, 2006. Another on the 9th floor on May 2, 2011 left two dead. Another fire, caused by food left on a stove on the 2nd floor on October 26, 2015, caused the entire building to be evacuated indefinitely. Many residents were temporarily sheltered in the gymnasium of the Levite Jewish Community Center.

IberiaBank foreclosed on the building in 2018, and sold it to LMS Investment Management of Homewood. In 2021 LMS announced a $40 million project to renovate the building for 242 units of "workforce housing", utilizing federal Historic Preservation Tax Credits. The developers negotiated with HUD to lift its requirement for senior apartments. Hendon & Huckestein Architects designed the renovation and Robins & Morton was the contractor.